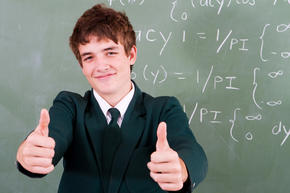 As educators, many of us are aware that some students will enter the classroom loathing mathematics. Although studying calculus and Maslow’s hierarchy of needs may not have prepared you as a top-notch celebrity entertainer to sustain interest at all times, there are strategies you can try to break up some mathematical monotony. For instance, you could take everyday objects or ideas and analyze them mathematically. You can also bring games and puzzles into the classroom, utilize physical/kinesthetic learning, and even create math songs.

What’s In a Name?

“What’s in a name?” asked Shakespeare in his play Romeo and Juliet, “That which we call a rose, by any other name, would smell as sweet.” Students like to think about names also. Why not have them analyze their own names in mathematical terms? On the most basic level, they can think about the percentage of vowels versus consonants in their names. They could also think about the geometry that is used to form individual letters. The symmetry of the letters could be analyzed, the transformational properties of the letters may be studied, and even tessellations could be formed by repeating rigid motions of letters. This is also an area rich for interdisciplinary learning. For instance, for a social-science connection, pupils could research the genealogy of their names. Another mathematical component connected to this might be to create a formula that numerates the number of relatives going back a certain number of generations. For a language arts connection, Romeo and Juliet and/or West Side Story could be studied because these plays, in fact, deal with people who come from different families, and thus different names. The history of immigration and various immigrant groups, including contemporary immigration, could be analyzed mathematically.

Use puzzles and games in mathematics. Chess, Battleship, card games, and certain video games can all relate directly and indirectly to mathematics. When presenting math games, values of respect, fairness, and collaboration may also be reinforced in tandem with the highlighted mathematical skills. You might even encourage players to create their own kind of game or puzzle that utilizes the specific mathematical content that is being studied.

All the World is a Stage

Take full advantage of the physicality of your classroom, and bring the space to life. Something as simple as throwing a beach ball to a student as a way to ask him or her to answer a mathematical question can liven the mood. If you’re talking about parabolas, you might encourage children to participate in a ball-throwing game where they graph the path of various trajectories and then try to figure out their equations. Any time you can create an atmosphere where students effectively interact with one another, you are going to make learning interesting for them. For instance, they could make a human histogram or a human scatterplot where they actually represent data points. Also, making mathematics theatrical can have many interdisciplinary applications. Your mathematicians may practice their public speaking and dramatization skills by stating various mathematical definitions and concepts with emotion and in creative theatrical styles. Studying civilizations in which many playwrights were also philosophers, mathematicians, and scientists would connect to the social sciences and general sciences, as well as mathematics specifically.

If all else fails, try making up a song about a mathematical topic and then teach it to your class. If you are a little bashful about your musical abilities, challenge them to create their own songs or videos on mathematical topics. Students may remember the raps and the ditties that they personally create and connect to mathematical topics more than the straightforward definitions and formulas that they are sometimes instructed to drill. If the teacher and the class do a little dance routine or jig to the mathematical song, this may also help keep everyone engaged while reinforcing the material.

Learners explore their names for mathematical terms. In this math vocabulary lesson, they investigate their names and express their names in mathematical language. For instance, learners can count the amount of letters and analyze the geometric shapes of the letters.

Pupils work in groups to solve a variety of puzzling activities: math, spelling, anagrams, and geography. They use cooperative skills to accomplish each task and chart their group progress.

Apply the game of baseball to a fun review activity and earn a “base” for each subject question that is answered correctly. This activity can be modified and used for other subject areas.